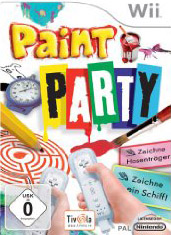 My second Wii game was a quite interesting one to work on. The game was a mixture of a picture guessing game plus some painting minigames and general tools for kids to paint on their Wii. The programming has mostly been done without any game engine but just some libraries for painting effects and wii controller input. The game in the end was a bit hard to control in some parts because the wii controllers aren’t exectly precise drawing tools but the end result was quite fun though. It was also the last game I’ve worked on at exozet so I did not stay for the final release but when i left it was 90% finished.

Creative fun for the whole family on the Wii. It is the first painting and creative game format on the motion console. It is all about drawing, guessing, painting and painting. Whether alone or with up to four players - this game offers variety and pure entertainment. The party goes off especially in multiplayer mode: catch friends or family and off you go! The first person to guess the terms searched for in the game »Monday Painter« wins the match. The game principle used is intuitive and ensures long-lasting guesswork. But also the single player mode is impressive: Here the player traces figures, stamps or sprays crazy motifs.